The Good, The Bad & The Ugly Of Simp Psychology 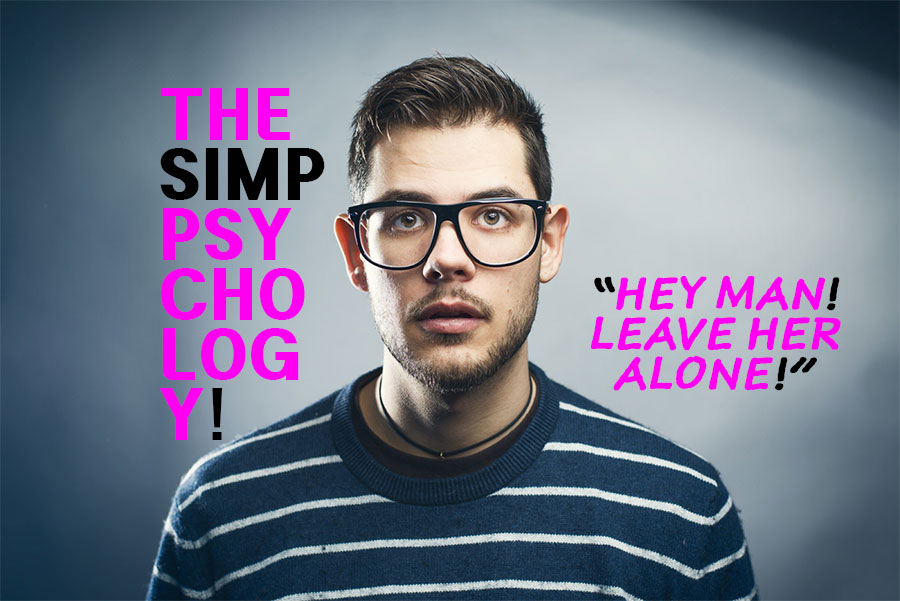 If you’re decently active online, especially in the internet dating scenario, then you must have come across this term ‘Simp.’ Now either you have no idea what it is, or it probably evoked a strong emotional reaction in you. Well, hold on to that feeling, even if you didn’t have any, while we explore this fascinating aspect of the human psyche – The Simp Psychology.

So What Is A Simp?

To put it simply, SIMP means a simpleton. Or, to be more specific, a man who is subservient and perpetually submissive to women. He does this intending to somehow win her over even if the woman has or does not offer anything in return.

Although the term has existed for a long time now as a relatively tame insult, it gathered popularity recently as a much more crude insult. Initially, the word may have meant just a simpleton, but now it represents someone willing to beg and grovel just for the sake of winning over a woman and hopefully getting laid! And this is all thanks to the heavy usage and popularity of social media, especially the Twitch streaming platform. People, especially the young folks, have gotten hooked on various acronyms such as the popular term YOLO. And now we have SIMP or in the Twitch world – ‘Sucker Idolising Mediocre P*ssy.’

Where Do SIMPS Come From?

As is with most psychological conditions, even the origin of SIMPs come down to the family background. These men were typically undervalued by their parents resulting in the form of, well, Mummy issues! And then there’s also the issue with anatomy. In our society, appearances matter a lot, resulting in a lot of psychological damage. You’ll rarely find a 6’2″ hunk acting like a simp. As you can guess, simps typically have an inferiority complex when it comes to how they look.

Why Do Men Simp?

Haven’t you guessed it already? It’s to get laid! And acting like a simple tends to work. Well, at least sometimes it does. It’s more than doing nothing, that is. But then that’s where shit got real!

You see, simps getting laid, albeit rarely so, it didn’t go down well with other male egos in the market. So, like women who slut-shame other women, men began simp-shaming other men. Soon everyone else caught on, started simp-hunting, and the word became super popular.

Simps didn’t appear out of thin air. In a way, they came about as a result of feminism. Now before all the empowered women get up to burst my balls, hear me out. You see, every cause has an effect. And feminism caused an existing system to change. Men had power. Feminism challenged and took away some of that power. And from among all that rubble of men who have lost power emerged this kind of men – the SIMPs. From men in power, getting literally free sex to selfless, egoless women worshippers – again for sex really.

Well, of course, some women welcomed this new kind. No market survives without equal supply and demand. So women were willing and even enjoying the fresh supply of these bootlicking SIMPs.

Just take the case of Belle Delphine. Now Belle came up with an idea to sell her bath water for $30 a jar online. Crazy and stupid, right? Wrong. They got sold out super fast. And that is just one of the many examples of how crazy simps can be and how cunning women can be who take advantage of such simps. Of course, it can be a double-edged sword, too, as in the case of Pokimane – a famous Twitch streamer who lost nearly 93% of her viewership when another female streamer ratted her out by mentioning that Pokimane had a boyfriend. It’s a sad world really that thrives on such fake pleasures and fights.

When a girl uploads a photo:

Guy with No Chance: “You’re an embodiment of the grace and goodness of the lord. Keep shining in his marvellous light”

As a reaction to the emergence of feminism and the SIMP species, the other male eos decide to fight back, trying to control what’s left  – themselves. Or rather their own kind, you know – their brothers, race, gender. All of them gathered together behind an ideology that was strictly against Simping. A Simp was the lowest of the low for these folks. But basically, these men simp-shamed to free up the dating market that the SIMPs had hijacked.

Now whether you like it or not, all males live on a simple scale. On the one end, you have the doormat, a stepover human. A man utterly lacking in any self-respect and who swallows down insults with a smile so long as there is hope for getting attention from the opposite sex. This is Simpest of all simps. And then, on the other end, we have the misogynists. Men lingering on the borders of being a psychopath. Highly stuck up guys who think lowly of women and won’t do anything for a woman’s sake.

The Sims give way too much, an unfair amount, really. And that is because they are quite delusional beings. A classic new-age example would be Twitch. Where you see Simp men (and a lot of pervs) subscribing to the girls on Twitch, donating money to watch them fiddle around with a console & simping just to get noticed! A totally sub-par relationship.

But then, on the other side, some men avoid paying anything at all – even when they should be rightfully paying! To put it another way – we all pay for sex. Don’t get us wrong, we don’t just mean money. You have to spend a lot of resources – time, energy, effort, and much more for love, sex, intimacy.

On the contrary, the right answer is balance. Without a doubt, don’t be a SIMP – have some self-respect. But if there’s anything we’ve learned from this heavily patriarchal world we live in, it’s that there are far too many men who think too highly of themselves, especially when it comes to women. As a result, they don’t respect women equally and often undermine and underway even where it is due. So don’t be an asshole like that. If you want to know what is a good human trait, then It’s doing something good for others, including the opposite sex but maintaining your own self-respect at the same time.

You don’t want to find yourself on either end of the Simp scale. Where you should ideally be is somewhere in the middle. Don’t blindly believe all that the internet says. It’s not all black and white, you know! The society we live in has brought us up so that there is a simp and a psychopath in all of us.

You’re just too naive if you think you can have a good long relationship with any woman without having to do anything for her from time to time. That is a part of relationships, giving and receiving. But if you’re willing to be taken advantage of all the time, then you’re going to very lonely or, worse, in a very abusive relationship. And if you’re the stuck-up, highly egotistical psychopath kind of guy on the other end of the scale, we’ll then you won’t have any luck finding a decent, intelligent woman to tolerate your nonsense.

Don’t give in to either feeling. Find a middle path. Frankly, it might be better to lean slightly on the Simp side rather than the misogynistic psychopath side. The key, like with everything in life, is finding that fine balance.